The Support Vector Machine is a Supervised Machine Learning algorithm that can be used for both classification and regression problems. However, it is most used in classification problems. The goal of the algorithm is to classify new unseen objects into two separate groups based on their properties and a set of examples that are already classified.

Some common applications for this algorithm are the following:

The algorithm creates a partition of the features space into two subspaces. Once these subspaces are created, new unseen data can be classified in some of these locations.

To address non-linear relationship, the algorithm follows a technique called the kernel trick to transform the data and find an optimal boundary between the possible outputs. Basically these are techniques to project the data into a higher dimension such that a linear separator would be sufficient to split the features space.

The separation between the two zones is given by a boundary which is called the hyperplane. Let us look at how the concept of hyperplane works in the Support Vector Machine algorithm.

The algorithm will find the hyperplane that best separates the classes of the target variable by training a set of n observation of the features. Each observation is a pair of the p-dimensional vector of features (x1, x2, x3, …, xp) and the class yi which is the label.

Usually the classes of the target variable are defined as +1 and -1, where each of these classes has their own meaning (negative vs positive, spam vs non-spam, malign vs benign).

The +1 class could be “non-spam” or “positive” sentiment and the class -1 could be “spam” and “negative” sentiment.  Depending on which side of the hyperplane a new observation is located on, we assign it a particular class (-1, +1).

In order to optimize the hyperplane or the separation boundary between the two classes there are two important concepts that need to be described. These are the concepts of Maximal Margin Hyperplane (MMH) and the Maximal Margin Classifier (MMC).

The classes of a target variable can be well segregated by more than one hyperplane as we can observe in the figure below. However, we should select the hyperplane with the maximum distance between the nearest observations data points and the hyperplane, and this condition is achieved by the Maximal Margin Hyperplane. Therefore, maximizing the distance between the nearest points of each class and the hyperplane would result in an optimal separating hyperplane.

The continuous grey line in the above figure is the Maximal Margin hyperplane, as is the hyperplane that maximizes the distance between it and the nearest data points of the two classes. To find the Maximal Margin Hyperplane, it is necessary to compute the perpendicular distance from each of the training observations xi  for a given separating hyperplane.

The smallest perpendicular distance to a training observation from the hyperplane is known as the margin. The Maximum Margin Hyperplane is the separating hyperplane where the margin is the largest.

Support Vector machine handles situations of non-linear relations in the data by using a kernel function which map the data into a higher dimensional space where a linear hyperplane can be used to separate classes. 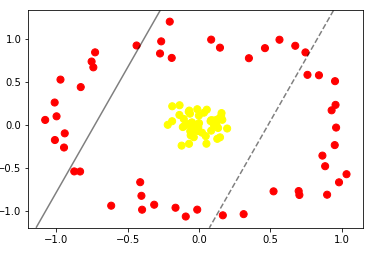 Non-linear separation to the data

In situations such as in this figure, Support Vector Machines algorithm becomes extremely powerful because using the kernel trick technique they can project the data into a higher-dimensional space and thereby we’re able to fit nonlinear relationships with a linear classifier. The kernel trick represent a real strength in the Support Vector Machine algorithm as we can solve non-linear classification problems with efficiency.

The Support Vector Machine  algorithm can be fit with the scikit learn library from python which provides a straightforward method to use this algorithm. It is possible to parametrize and tune important parameters of the algorithm that are explained below: