In the previous article we learned that different investors exhibit different levels of risk aversion. For each investor the degree of risk aversion translates into certain utility (read satisfaction) that he gets from an investment. In our example of $100 for sure vs. a gamble where you get $200 or nothing, when a risk averse chooses to go with $100 for sure, it means that the $100 with certainty provides him more utility compared to the gamble. For another person, even $90 may be good enough for him to find more utility compared to going for a gamble. However, if the certain amount is reduced more, say to just $20, then he might as well try the gamble option.

The risk-return utility function of an investor can be exhibited using the following formula:

We can make some interesting observations from this function: 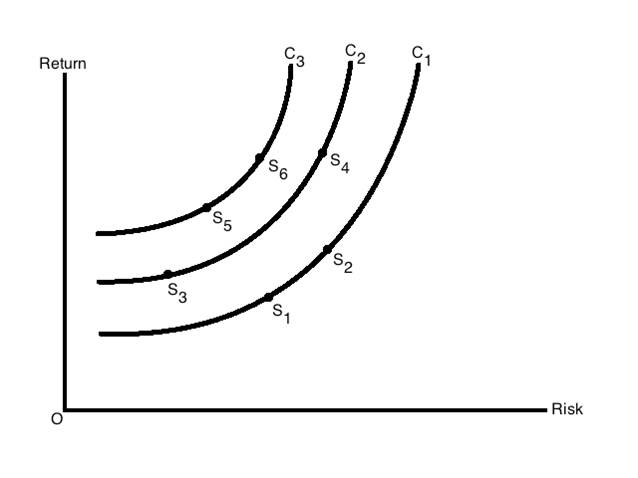 Indifference Curves for an Investor

Note that each of the curves (C1, C2, and C3) represents different levels of utility for the investor. However, on any one indifference curve, the utility is the same anywhere on the curve. For example, on indifference curve C1, the investor gets same level of utility (satisfaction) at both points S1 and S2. Similarly, the utility is the same at S3 and S4.

Now let’s compare points S4 on C2 and S6 on C3. On point S4, the investor faces a certain amount of risk for certain return. On point S6, he gets the same return as on S4 but at lower risk. So, given a choice, he can increase is utility by moving to the indifference curve C3.

In general, the utility of risk-averse investors increases as we move leftwards in the graph. Given a choice between C1, C2, and C3, the investor would want to be on C3 to maximize this utility.

The indifference curve will have different shape for different types of investors as shown in the following graph.