Many organizations use MS Excel for data analysis and financial modelling and it is likely that your company also expects you to perform and report data analysis through Excel. However, you may be more interested in performing the actual analysis using R tools and then presenting the results in Excel. The good news is that R has a package which does exactly this. It's called XLConnect. XLConnect is a package that allows for reading, writing and manipulating Microsoft Excel files from within R.

Using XL Connect, you can:

XLConnect is different from other data importing packages because:

The package can easily be installed from CRAN via install.packages("XLConnect"). Once installed, we can load it using the require(XLConnect).

You're now ready to use XLConnect!

XLConnect can be used to create and manipulate excel files from scratch. In the below example, we will create a new excel workbook, add a new sheet to it and then load the tab-delimited stock price data about Goldman Sachs into it.

The newly created excel file is shown below: 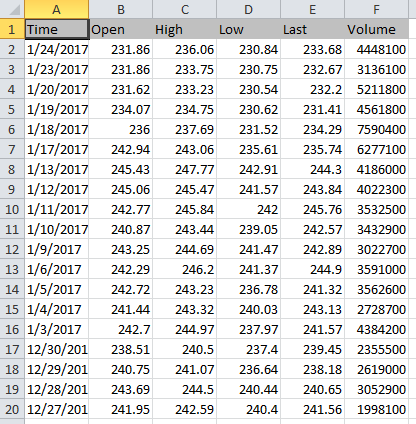 We first used the loadWorkbook() function to load the workbook into an R object. Then we got a list of sheets using the getSheets() function. Then we used readWorksheet() function to read the data from the sheet named 'Dec-2016'. The dat is loaded into a variable called 'data' which can then be used to perform analysis.

While our objective here was to introduce you to the XLConnect package, we will soon have a full course dedicated to it.

You can learn more about XLConnect using the package vignette, the numerous demos available via demo(package = "XLConnect") or browse through the comprehensive reference manual.