Time series have several characteristics that make their analysis different from other types of data.

A cyclic pattern exists when data exhibit rises and falls that are not of fixed period. The duration of these fluctuations is usually of at least 2 years. Many people confuse cyclic behavior with seasonal behavior, but they are really quite different. If the fluctuations are not of fixed period then they are cyclic; if the period is unchanging and associated with some aspect of the calendar, then the pattern is seasonal. In general, the average length of cycles is longer than the length of a seasonal pattern, and the magnitude of cycles tends to be more variable than the magnitude of seasonal patterns.

The following two charts show examples of trend and seasonality. The first chart plots the quarterly GDP data which shows a clear uptrend over time. The second chart shows the quarterly earnings for John Deere which exhibits seasonality in earnings within a year. 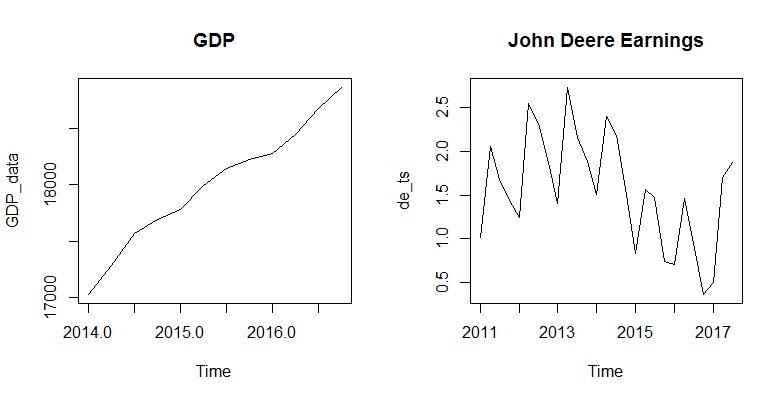 In the following lessons we will learn about how we can use time series analysis to develop mathematical models that provide plausible descriptions for sample data. Before we get to the models, we will learn about a few important concepts such as the stationary process, autocorrelation, and decomposition of time series in more detail.

The following vector contains the quarterly John Deere earnings for the period Jan 2011 to July 2017.