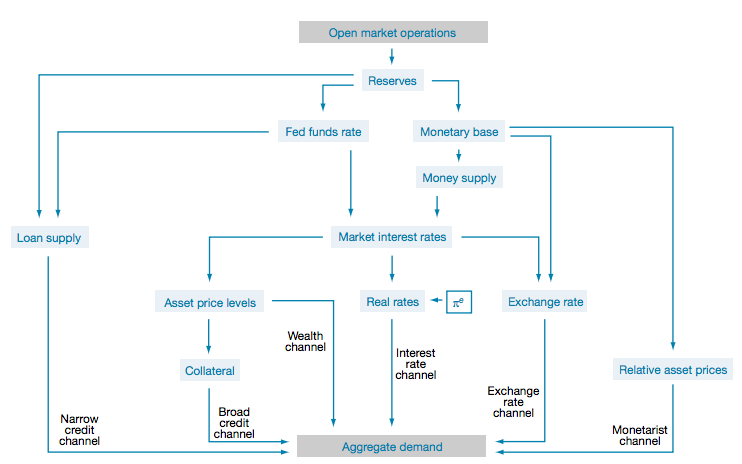 The process begins with the transmission of open market operations to market interest rates, either through the reserves market or through the supply and demand for money more broadly. From there, transmission may proceed through any of several channels.

The interest rate channel is the primary mechanism at work in conventional macroeconomic models. The basic idea is straightforward: given some degree of price stickiness, an increase in nominal interest rates, for example, translates into an increase in the real rate of interest and the user cost of capital. These changes in turn lead to a postponement in consumption or a reduction in investment spending. This leads to a decrease in aggregate demand, which decreases inflation, employment, and real GDP.

An alternative path is the wealth channel, in which households’ wealth is a key determinant of consumption spending. The connection to monetary policy comes via the link between interest rates and asset prices: a policy-induced interest rate increase reduces the value of long-lived assets (stocks, bonds, and real estate), shrinking households’ resources and leading to a fall in consumption.

In the broad credit channel, asset prices play an important role as they determine the value of the collateral that firms and consumers may present when obtaining a loan. In “frictionless” credit markets, a fall in the value of borrowers’ collateral will not affect investment decisions; but in the presence of information or agency costs, declining collateral values will increase the premium borrowers must pay for external finance, which in turn will reduce consumption and investment. Thus, the impact of policy-induced changes in interest rates may be magnified through this “financial accelerator” effect.

Under this channel, the essential insight is that because banks rely on reservable demand deposits as an important source of funds, contractionary monetary policy, by reducing the aggregate volume of bank reserves, will reduce the availability of bank loans. Because a significant subset of firms and households relies heavily or exclusively on bank financing, a reduction in loan supply will depress aggregate spending.

The exchange rate channel is an important element in conventional open-economy macroeconomic models, although it is often neglected in the closed-economy models typically applied to the United States. The chain of transmission here runs from interest rates to the exchange rate via the uncovered interest rate parity condition relating interest rate differentials to expected exchange rate movements. Thus, an increase in the domestic interest rate, relative to foreign rates, would lead to a stronger currency and a reduction both in net exports and in the overall level of aggregate demand.

The monetarist channel focuses on the direct effect of changes in the relative quantities of assets, rather than interest rates.

The logic here is that because various assets are imperfect substitutes in investors’ portfolios, changes in the composition of outstanding assets brought about by monetary policy will lead to relative price changes, which in turn can have real effects. According to this view, interest rates play no special role other than as one of many relative asset prices. Although this mechanism is not part of the current generation of New Keynesian macro models, it is central to discussions of the likely effects of policy when, as in the case of Japan, there is a binding zero lower bound on nominal interest.

This article is created with references taken from New York Fed website.