Venture Deals: Be Smarter Than Your Lawyer and Venture Capitalist - Book Review

Dick Costolo, co-founder of Burning Door Networked Media and Feedburner before becoming the CEO at Twitter and a veteran of VC funding, had this to say in the foreword about Venture Deals: Be Smarter Than Your Lawyer and Venture Capitalist by Brad Feld and Jason Mendelson:

When I read this book, I kept thinking over and over “Where were you, when I started out?” as the knowledge between these covers would have saved me a remarkable amount of time and money on my journey.

Brad and Jason have written a book that is hugely important for any inspiring entrepreneurs, students and first-time entrepreneurs. But it’s not just limited to them – as I read through it I found new pearls of wisdom that even with all the experience I have today I can put to good use.

Feld and Mendelson have put together a book that details how venture capital deals really work. The book also covers negotiations, with perspectives from funders and funded given equal weight. 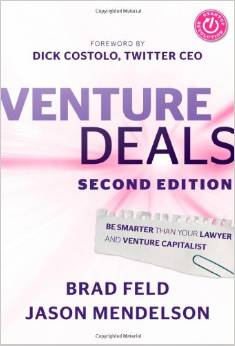 The book explains how venture capitalists are motivated and compensated for their efforts and the impact it has on the companies they fund. The factors to consider for different stages of funding are also detailed in Venture Deals: Be Smarter Than Your Lawyer and Venture Capitalist.

The capitalization debt, convertible debt, how the venture capital fund works, negotiation tactics, raising money, issues at different financing stages, letter of intent, legal terms in VC funding are the other topics discussed in the book.

Appendices include a sample term sheet, a sample letter of intent and excerpts from startup communities. All along the book the authors have included the ‘entrepreneurs perspective’ which are comments by Matt Blumberg the CEO of Return Path.