Zanny Mintton Bedoes, the Editor-in-chief at The Economist said that the system before Obama Care was a ‘messed up system’, with 50 million people uninsured. Obama Care has gone on to get more people under the health insurance umbrella; it has been useful for people with pre-existing conditions.

Critics argue that the reality on the ground has been somewhat different. Few insurers participate in the insurance marketplace. The New York Times reports the concerns of the man after who the Act is informally referred to –Obama-had to say in The Journal of the American Medical Association, “Too many Americans still strain to pay for their physician visits and prescriptions, cover their deductibles or pay their monthly insurance bills; struggle to navigate a complex, sometimes bewildering system; and remain uninsured,”.

Hilary Clinton, the Presidential hopeful feels the government needs to play a still greater role to ensure that more people are insured and that they get quality healthcare. Donald Trump, the Republican nominee espouses private insurers must be able to compete across state lines.

Obamacare aims at helping the poorest, with the government taking the load of premium from them; individual insurers higher up the income scale do not see a great benefit from it. The government hopes to regulate the insurance market place more and offer insurance as a provider, since it feels private insurers are not participating as it should. Private insurers feel that this would give the government an unfair advantage. There is further concern that the bill in its current form will not withstand in the insurance market for long. What is unanimous though is that a greater clarity on what the Bill is about is required before debating it.

Obamacare: What is it about really?

The salient points of Obamacare are :

Look at this video by the White House to understand the basic premise of ObamaCare.

White House White Board: What ObamaCare Means For You from The White House on Vimeo.

To apply for Health Insurance in 2017 at a health insurance marketplace, the following points need to be remembered:

Important dates for Insurance coverage in 2017:

What has Obamacare meant for the American population?

The percentage of uninsured citizens has fallen from 2013 to 2015 according to this infographic by the Commonwealth fund. 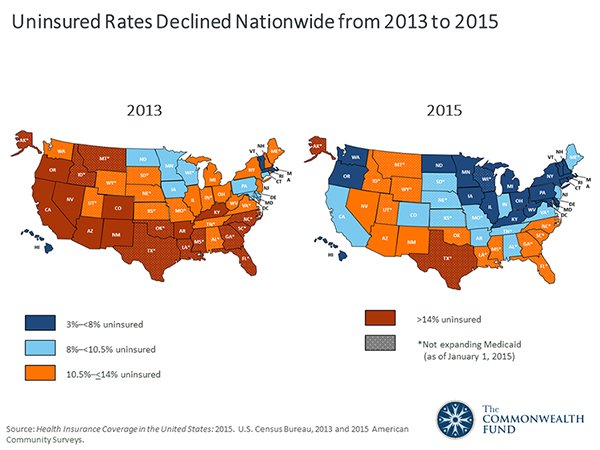 This spurt of enrollments has been fuelled by middle and lower income groups, African-Americans and Latinos, senior citizens and a group that generally does not take insurance, young adults in their 30’s. (Source: The Commonwealth Fund)

While it is true that Obama Care is a big step in the right direction to ensure that all American citizens avail health care, that the law needs a review to iron out its structural and technical problems is also true. The government has to update the law to ensure insurers do not lean into loopholes to not provide coverage to those who need it most. Quality access for all seems to the mantra for the future of Obama Care, with strong marketplaces and more insurance companies and counties participating in them.